“I’m not a real surfer, I’m an aspirational surfer.”—Alex Israel

Alex Israel embraces pop culture in a way that would make Andy Warhol blush. As an artist, he takes the superficiality he sees in his hometown of Los Angeles seriously—its horizon lines with sunset colors around dusk and dawn, the stucco surface of its buildings, Hollywood, the corny television and radio shows that play 24 hours a day, the freeways and traffic, and even surfing—and renders it meticulously in his work.

Born in 1982, Israel grew up in Los Angeles and attended the prestigious Harvard-Westlake School. He got his undergraduate degree as an art major from Yale, and then received his master’s degree at the University of Southern California back in LA.

Israel is in a unique position to muster the varied forces of Los Angeles in unprecedented ways. He occupies a kind of no man’s land located somewhere between the film industry, retail, and the art world. He freely moves across the borders of these terrains, dragging concepts from one into the other, such as taking props from a film he produced and directed, titled SPF-18, and putting it into a gallery exhibition, or using that gallery space as the backdrop for his talk show AsItLAys(the title a reference to Joan Didion’s 1970 book Play It As It Lays, set in Los Angeles). Even his logo, a profile of own his head wearing sunglasses—which is a riff on Alfred Hitchcock’s well-known profile silhouette—straddles the concepts of art, commerce, and film.

In this merging of mediums, and in the discussion of authenticity and superficiality, Israel often uses and references surfers, surfing, and beach culture.

In one example, he invited Laird Hamilton as a guest on his talk show and asked him a series of pre-written questions read from index cards, his stiff, deadpan, monotone delivery contrasting with Hamilton’s colorful, self-satisfied humility. Questions ranged from the mundane to the spiritual: “What is your favorite SPF? Are you good about keeping up with regular visits to the dentist? What humbles you?” Twisting the conventions of celebrity interviews, Israel chose not respond to any Hamilton’s answers. He then amusingly wrapped-up the show, as he does with all of them, by saying, “Well, that’s all the time we have for today.”

In SPF-18, he uses a stereotypical portrayal of surfing as a backdrop to support the narrative about teens coming of age in Malibu, similar to earlier mass-audience films like Ride the Wild Surf(1964) and PointBreak (1991). Nevertheless, he has noble intentions with the narrative. The movie presents alternate, atypical answers to familiar struggles of growing up, like reshaping notions about losing one’s virginity or validating creativity as a legitimate career path.

SPF-18was shown in high schools across the country, screened similarly to the way surf films were distributed in the 1960s and 70s. “I thought, what a great way to once again pay homage to the history of this region,” Israel says about the surf film distribution model, “and to also reach teenagers and potentially get them excited about art and creativity.”

One of the characters in SPF-18discovers her creative side by spray painting a wetsuit, and realizes that she can parlay it into a commercial product. In real-life, Israel took the same wetsuit concept and used it to create sculptural pieces for a Gagosian exhibition in Los Angeles. He wore the stucco-textured wetsuit himself, molded and cast it in aluminum, which he then repainted to match the gradient colors of a sunset. He mounted the suit on a metal torso, giving it the qualities of a Hellenistic period sculpture reminiscent of what one might find at the Getty Museum.

“I think of the wave as a sort of interesting metaphor,” Israel says. “You can go with the wave or against it, or ride on it or against it. And you can gain momentum, do tricks on it—use it to your advantage. If the idea of lifestyle is the wave, then I think there’s something to that.”

At the beginning of SPF-18, the narrator, Goldie Hawn, makes the observation: “When you grow up in L.A., real life and the movies can get a little mixed up.” Israel is a believer in “infrathin,” a word invented by the artist Marcel Duchamp that indicates the thin separation between related things, a term Israel appropriated for his clothing line. The concept of infrathin is key to understanding how he thinks about circumventing conventional boundaries. Movies, video, film, television, and fashion occupy an increasingly larger part of our waking hours, and Israel’s work operates in multiple cultural zones, addressing multiple audiences. “I often think about the infrathin—the aura of art, the difference between art and life,” he says. “Making non-art, or making things that are in between or art adjacent can be incredibly freeing and inspiring. In my experience, that freedom and inspiration often pours over into the next body of work.”

That pouring over can be seen in his sunglass brand, Freeway Eyewear, where the artist examines popular culture from a side-angle. The brand has five different lines, each named after a major LA freeway. “Freeway sunglasses,” he says, characterizing the brand, “are made for international shipping magnates, American gigolos, blonde bombshells, ladies-who-lunch, country club tennis pros, martyred grunge rockers, post-modern architects, Bat Mitzvah tutors, out-of-work actors, psychic friends, and you. Seeing is believing.”

He also has a sixth line, LA Rays, whose title was appropriated from a now defunct line that was located in Laguna Beach in the 90s. He commissioned surfer-artists John Van Hamersveld to design the logo, and Anthony Friedkin to photograph the goods. Prototypes of the glasses are featured in Israel’s 2010 art video, Rough Winds. The stylistic affinity of Freeway Eyeware to the Hobie sunglass line is deliberate.

Conceptually, Israel views the lenses of his sunglasses as devices that frame the LA landscape, and to some extent, the LA experience. He’s exhibited eight-foot tall, UV-protective plastic lenses in a number of spaces, including LAXART in 2013. They reference the rich art history of California’s Light and Space and Finish Fetish movements, and bring to mind the work of artists like Doug Edge, Robert Irwin, John McCracken, Helen Pashgian, and DeWain Valentine, along with current up and coming LA artists like Gisela Colon and Alex Weinstein.

Israel’s Lenssculptures are a great example of how his work ignores conventional distinctions between commercial and art contexts. They reach out and touch so many cultural reference points that it’s nearly impossible to pin down, codify, or identify them. It’s what makes his work so compelling—operating on a different plane, free from the conventional categories that art normally adheres to.

Yet, some of Israel’s work is created as straightforward, hanging gallery style art. In the summer of 2018, Israel exhibited a series called New Waveat the Gagosian gallery in Hong Kong, which was comprised of a collection of sculptures composed of airbrushed and hardened fiberglass, each panel cast from an original that was made of cut and sewn neoprene. LA surfer/artist Ken Price’s acrylic and ink drawings inspired the series, especially Price’s kitschy Tijuana curio color palette and the simple outlines that define the subject matter. Hokusai’s iconic wood block prints of waves are another important visual reference point.

As Israel says, “I think of the wave as a sort of interesting metaphor. You can go with the wave or against it, or ride on it or against it. And you can gain momentum, do tricks on it—use it to your advantage. If the idea of lifestyle is the wave, then I think there’s something to that. I want to be speaking the language of the culture of our time, and that’s lifestyle. That’s not to belittle, or poke fun or criticize that way of thinking.”

Israel believes “superficiality is filled with meaning.” His art reflects the ubiquitous, clichéd elements of Los Angeles, the stuff you never think about because it lurks in the background even as it’s right in front of our faces—largely forgotten and ignored. For Israel, Los Angeles is truly La La Land, the place where fact becomes fiction and fiction becomes fact. It’s a place where surfing becomes a symbolic promise of a certain lifestyle. It’s a glorious way to confuse the conventions of commerce, film, and art. And so he pulls every lever he can. 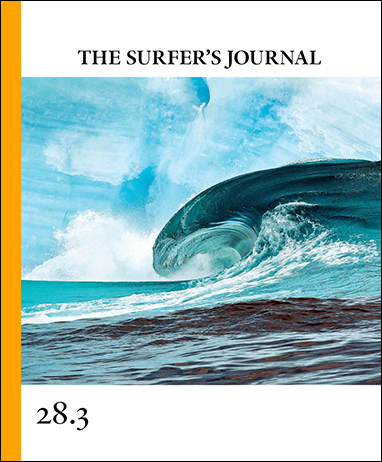