I’ve driven my wife and children crazy during beach walks because I feel the need to point out the waves. I drift in and out of conversations, distracted by the way a set is wrapping into the lee of a particular point, organizing itself. Pure glee when the outgoing tide suddenly jacks the waves a few feet higher as they roll across an emerging sandbar. Then I begin to brood because I didn’t bring a board or a wetsuit. Nothing, I’m told, is more boring than when I do start talking about the waves, harpooning dialogues with a tour guide’s gesticulations, effusiveness tinged with longing and frustration, because I just want to surf and can’t at that moment. My fellow walkers nod politely, resume their pace, pick up the threads of their sabotaged topics, and leave me ogling seaward as if I’ve suddenly forgotten where I am.

Surfers spend a lot of time looking at waves, our fixation geared toward the prospects of experiential gratification. We want to be out there in it. Even mind surfing, the shore-bound close reading that might not necessarily be a surf-check but a fantasy, has the practitioner imagining himself superimposed, spliced into the empty wave’s short film. It can be excruciating to stand back and give the water a chance to be itself, to do what it does without our inhabiting its mutating textures.

I hadn’t planned on meeting a more unnerving kindred spirit in the literary lineup that morning: a newly minted Jesuit from late-19th century England. But Hopkins seemed to get it.

So, when I ran across the following excerpt from Gerard Manley Hopkins’s journals, I leaned forward in my chair with a twinge of caffeine-amped suspicion and envy. Suddenly awake and able to transcend the oppressive spring drizzle gnawing the snowbanks outside in the New Hampshire dawn, I joined the beguilingly contented, non-surfing poet for a legitimate evocation of surf:

I was looking at high waves. The breakers always are parallel to the coast and shape themselves to it except where the curve is sharp wherever the wind blows. They are rolled out by the shallowing shore just as a piece of putty between the palms whatever its shape runs into a long roll. The slant ruck or crease one sees in them show the way of the wind. The regularity of the barrels surprised and charmed the eye; the edge behind the comb or crest was as smooth and bright as glass. It may be noticed to be green behind and silver and white in front: the silver marks where the air begins, the pure white is foam, the green/solid water. Then looked at to the right or left they are scrolled over like mouldboards or feathers or jibsails seen by the edge. It is pretty to see the hollow of the barrel disappearing as the white combs on each side run along the wave gaining ground till the two meet at a pitch and crush and overlap each other…(GMH Major Works)

I hadn’t planned on meeting a more unnerving kindred spirit in the literary lineup that morning: a newly minted Jesuit, sexually repressed, perhaps, in late-19th century England. But, on August 10, 1872, twenty-eight years old, he was riding the wave of his recent discovery of the works of Medieval philosopher, Duns Scotus, who, according to Stephen Greenblatt et al in the Norton Anthology of English Literature, gave Hopkins the idea of inscape—the “distinctive design that constitutes individual identity:”

This identity is not static but dynamic… And the human being, the most highly selved, the most individually distinctive being in the universe, recognizes the inscape of other beings in an act that Hopkins calls instress, the apprehension of an object in an intense thrust of energy toward it that enables one to realize specific distinctiveness.

Scotus’s belief in “haecceity” or thisness, which defended the uniqueness of individual things, seems to fuel Hopkins’s observations in this particular journal entry written while he was on vacation on the Isle of Man. Here, the poet strives only to describe, to possess by translating perception into an accurate, scientific, and vaguely poetic visual language.

Most poets can’t help enlisting waves on their solipsistic quests for meaning or some direction in their forays into the problems of being human. Robinson Jeffers’s “smoking mountains bright from the west” (“November Surf”) or “white-maned, wide-throated…heavy shouldered children of/ the wind” (“Granite and Cypress”) are usually gaining on the rocks they’ll pound or cover, where the poet stands contemplating time and erasure, the insignificance and sins of the human race and what the waves suggest rather than what they are. Basil Bunting, too, though “agog for foam” (#3, First Book of Odes) admits “…how much more the sea / trembling with alteration must perfect/ our loneliness by its hostility.”

He employs the words hollow and barrel—monolithic descriptors in the contemporary surf lexicon. He gropes into the 20th century, building phrases around the holes that will be filled by words like tube, lip, or closeout.

Hopkins’s exegesis of surf is untainted, almost clinical in its syntactical breakdown of the breaking wave’s physical process, its variation of color and architecture. His notes on waves are a field sketch, a quick plein air watercolor with words, but one with a restrained riptide of joy and connection. Suppressing the poet, in some ways, is almost as hard as suppressing the surfer. But, Hopkins seems to get it, even though he’s asking himself neither, “Where would I be on that wave?” nor, like his poetic counterparts, “What does it mean to me?” He employs the words hollow and barrel—monolithic descriptors in the contemporary surf lexicon. He gropes into the 20th century, building phrases around the holes that will be filled by words like tube, lip, or closeout. There’s not a brushstroke of sadness or anxiety in his acuity, however, which would suggest that even though Hopkins had no intention of physically engaging the surf, his charging into the legibility of the animated element was just as satisfying.

In some way, Hopkins reminds me of the silhouette behind the wheel of a sagging Corolla I see from time to time. Nothing lashed to his roof, no finned tail jutting from his rear window, but there he is, installed on the scrubby promontory of the dim, sandy, dawn-patrol parking lot, staring out, setting up an easel in his imagination rather than crouching beside the vehicle waxing the deck of a beat-up longboard. Is he missing something, or awash in the purest moil of appreciation, apprehending the “true selves” of waves? I’m usually too focused to ask him, too fired up about getting in the water as I jog gingerly past his coffee-steamed windshield across the lot’s sharp pebbles. The guy in the Corolla ignores me completely, even seems to understand that the storm conditions are cleaning up, that the protean waves are assuming elegant shapes in their provisional identities. He’s dry, warm, and probably in deeper than any of us.

Ralph Sneeden was born in Los Angeles and grew up on Long Island and the North Shore of Massachusetts. His poems and essays have appeared in The Kenyon Review, New England Review, Ploughshares, The New Republic, Slate, and others. He teaches English at Phillips Exeter Academy, where he is the B. Rodney Marriott Chair in the Humanities. This essay first appeared in AGNI and was reprinted with permission. 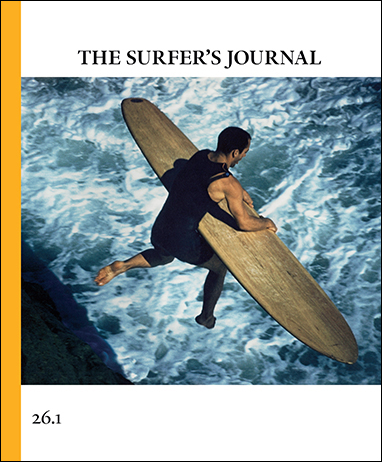 This essay first appeared in TSJ 26.1.