Climate change isn’t a problem of our future—it’s here. According to a study in the Proceedings of the National Academy of Sciences, sea level rise is accelerating faster than previously thought. If it continues its acceleration, one of the many results of rapidly rising oceans will be the remaking of coastlines, and surf spots, all over the planet. We will still surf, but most of the spots we know will be radically changed. Many will be gone. Surfing, as we know it today, will soon be a thing of the past.

The last time there was this much carbon dioxide in the atmosphere, several million years ago, seas were 100-feet higher than they are today. Our ice sheets haven’t fully melted yet, but the Greenland Ice Sheet, for example, is losing one billion tons of ice every day—the weight of 10,000 aircraft carriers—says Poul Christofferson of Cambridge’s Scott Polar Research Institute. Former NASA researcher James Hansen says the planet is gaining the heat equivalent of four Hiroshima atomic bomb explosions per second, and 90 percent of that heat goes into the ocean.

While the enormity of climate change is hard to grasp, its effects are already visible. In the fall of 2017, the U.S. was hit by historic disasters on all major coastal fronts. Unprecedented rainfall and flooding cut Hanalei off from the rest of Kauai, fires and mudslides buried houses and shut down the 101 Freeway in Santa Barbara, and two Category 5 hurricanes hit Puerto Rico in two weeks, devastating an island of three million people. Climate experts forecast these types of phenomena to happen more frequently, and more intensely, due to a cascade of effects as CO2 levels build.

Sea level rise, in terms of single digit feet, may not sound earth shattering, but one foot of vertical sea rise can mean 100 feet of inland creep, depending on topography. As Jeff Goodell put it in his 2017 book, The Water Will Come, “The difference between three feet and six feet is the difference between a manageable coastal crisis and a decades long refugee disaster. For many Pacific Island nations, it is the difference between survival and extinction.” Kiribati, an island chain in Micronesia, has already purchased 12 square miles in Fiji, optioning the ability to relocate its entire population.

What’s coming in California is the disappearance of beaches, the crumbling of the Pacific Coast Highway, and the flooding of coastal towns. Sea levels won’t rise at the same rate everywhere. For every foot of average global sea level rise, California, for example, will get 1.25 feet, says the California Ocean Protection Council. A study by the U.S. Geological Survey revealed coastal bluffs in Southern California could lose 62 to 135 feet, on average, by 2100, exposing 250,000 residents and $50 billion in property to erosion or flooding.

Put in perspective, with just a single foot of sea level rise, Venice residents would have to paddle down Abbot Kinney to get their coffee. With three feet, Laguna Beach would have beaches only at the lowest tides. With six feet, Southern California would likely see two-thirds of its beaches drowned. Even webcams are threatened: 4,000 miles of fiber optic cable will be submerged within 15 years, according to a joint study by the University of Wisconsin and the University of Oregon.

University of California Santa Cruz professor and sea level rise expert Gary Griggs, PhD, discusses it in more immediate terms: “On the West Coast, El Niño events will cause sea level in the Bay Area to be a foot or two higher, for a month or two at a time. That’s like throwing in 50 years of sea level rise in the short term. Then you have king tides and storm waves occurring simultaneously. This is already happening.”

Former NASA researcher James Hansen says the planet is gaining the heat equivalent of four Hiroshima atomic bomb explosions per second, and 90 percent of that heat goes into the ocean.

The first surf spots to drown will be the low tide spots like Super Tubes, Stockton Avenue, Pitas Point, and Sandspit. Beachbreaks like Blacks, pointbreaks like Rincon and Malibu, and rock-reef breaks like Sunset Cliffs and Steamer Lane will be seriously degraded. Dan Reineman completed his PhD thesis at Stanford on California surfers’ home breaks, and found, “By 2100, the best conditions experienced by more than 40 percent of respondents today will no longer occur.”

This fate won’t be brought on by some evil interloper, but by our own hand. Our CO2 emissions are just too high. Scientists agree that in order to avoid the most catastrophic impacts of climate change, we need to limit global warming to 1.5 degrees Celsius above pre-industrial levels. At the 2015 United Nations Climate Change Conference in Paris, attended by every country in the world, political leaders agreed to limit warming to 2 degrees Celsius. In order to do that, every person on earth would need to limit their yearly carbon output to 1.6 metric tons of carbon. Every American, right now, emits 21.2 metric tons on average. This downsizing of emissions must also be done even as business and government leaders either ignore or actively work against climate change measures. It also must overcome a public opinion that’s been hijacked by confusion campaigns: 42 percent of Americans still don’t think climate change is caused by humans, while the science has been settled since the 1980s.

Some of those who do believe the facts have begun to address the problem themselves by purchasing electric cars and solar panels, flying and driving less, advocating and voting for stronger environmental laws, and buying local products. But a new study by the nonprofit Carbon Disclosure Project in conjunction with the Climate Accountability Institute reports that 70 percent of all CO2 emissions worldwide are produced by just 100 companies, almost all of them in the fossil fuel industry, including Exxon Mobile and Russia’s Gazprom. Combined, they’ve emitted more than 900-billion tons of greenhouse gases in the last two decades. Unless a radical shift away from fossil fuels becomes a central element of 7.7 billion lives, including company shareholders, we seem destined to merely manage the consequences.

For coastal dwellers, possible responses to sea level rise fall under two main categories: coastal armament or managed retreat. Unfortunately, we’ve most often chosen the former as our fix, a choice that’s done more harm than good. I grew up at Surfers’ Point in Ventura, and it provided a clear example of the dramatic contrast between the two approaches. In 1986, the dirt parking lot was paved over, and a bike path was built. Just five years later, the concrete was already crumbling into the ocean and the city was considering armament—rocks or a seawall—as an emergency fix.

Coastal Engineer and activist Paul Jenkin, the Surfrider Foundation, and other groups instead fought for managed retreat. The top of the point is a good habitat for that type of erosion mitigation: a river mouth fanning-out into cobblestones, and sandbars topped with scrubby dunes. There’s an estuary that can partially absorb an incoming ocean, and there’s room for sand, plants, and animals to migrate shoreward on nature’s timeline.

After a decade, Jenkin and company won. The pavement was moved 80-feet inland, the beach was replenished with local sand and river rock, and native vegetation was restored. Erosion has all but stopped, even during the El Niño winter of 2015/2016, when, according to a study by the USGS, California experienced beach erosion 76 percent higher than normal.

The lower part of the point, in contrast, shows how poorly coastal armament works. That area has a large paved promenade and seawall, topped with a high-rise hotel and three-story concrete parking garage. During the El Niño winter mentioned above, it suffered major damage, and the city placed jetty rocks along its base, doubling down on coastal armament. The rocks, however, reflect wave energy—creating backwash, increasing erosion, compounding currents on neighboring beaches where erosion is intensified, and disrupting the cyclical sand replenishment that comes each summer.

Eventually the armament will break down, leaving crumbling concrete fronting a beach that will be more eroded than if no wall had been there at all. Surf-wise, while the wave at the top of the point is intact, the inside of the point is a backwash-riddled hush puppy at high tide, only getting decent at the lowest tides, which are going away entirely.

For all its good, however, managed retreat requires a new calculus we’re not used to: putting a dollar amount on surf spots and beaches. It may be a debasing logic to put a monetary value on our culture, but if we don’t, our surf spots simply aren’t thought about. Surfrider Foundation CEO Chad Nelson did his PhD thesis on “surfonomics” and calculated in 2007 that Trestles drew in $8-13 million ($10-16M in 2018 dollars) in local spending, and had a value of $26 million ($32M in 2018). This new type of argument was cited by California Coastal Commissioners to help stop the toll road project that threatened one of California’s best waves.

Without this mode of thinking, beaches will continue to be armed by developers and homeowners interested in protecting different monetary assets: coastal properties and development. The irony is, from the North Shore of Oahu to California to Biarritz, a lot of those people are surfers.

“Why do we build seawalls?” asks veteran coastal engineer Dave Revelle, PhD. “Somebody’s house costs $3 million. They build a half-million dollar sea wall to save it. But what’s lost over time is the public trust, resources, coastal access, seal haul-outs, the sandcastle building zone, the volleyball courts. We know how much in taxes the property owner pays, but we don’t know the value of coastal recreation.”

From San Diego to Ventura, 30 percent of the coast—an amount Griggs calls “staggering”—is already armored. To keep this from becoming 100 percent, we need more direct action, and we need political will. What really stopped the toll road to Trestles was turnout. “It was amazing to see the groundswell of support that came for this thing,” says Nelson. “We had about 4,000 people show up for the Coastal Commission hearing, the most attended in history. Because of the sheer amount of people, the media, the public, and the pressure they put on the Coastal Commission, they voted it down.”

People will need to mobilize against the next toll road or beachfront gated community, vote for city council members and lawmakers who listen to environmental scientists, and strongly oppose coastal armament projects. We are also going to have to continue to address the underlying problem itself by limiting CO2 emissions globally.

Whether or not the next generation joins the fight, however, is up in the air. Daniel Pauly, a preeminent marine biologist, points to the concept of shifting baselines: As we ruin some aspect of nature, whether a population of bluefin tuna or a reef break, that degraded state becomes the new normal. As high tide becomes the new low tide, the crusty old locals of the future will rant about how much better it was “back in the day,” but this time they’ll be speaking truth. Future groms won’t know it, unless we don’t let that future come to pass.
The protection of our coast is going to be a major environmental cause, the way stopping whale hunts, banning DDT, and fixing the ozone layer were. We won those fights, and we can win this one too. But it will take massive participation by surfers. This is about literally every surf spot, on every coastline. Sea levels are rising. We need to protect what we have now, before our favorite waves slip under an endless high tide. 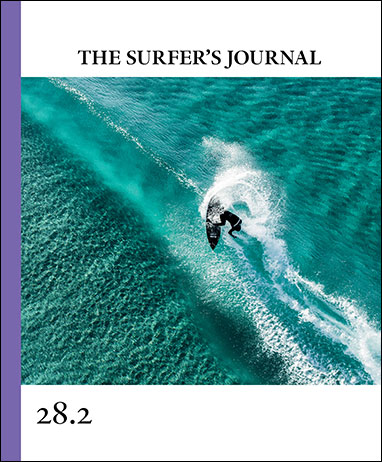