Not many surfers can actually deliver you to your stash of Google Earthed surf spots like Jim Banks. That A-frame peak near the fishing village. Those three lefts fronting dense jungle. The two reefs pinching that small port entrance. Hey, Jim, is this one a sand point? It’s likely Banks knows, has scouted it, or surfed it. Since age 17, he has been submerged in Indonesia’s surf wealth. Now 56, he lives at Uluwatu, happily distanced from his urban Sydney youth and his brief pro-surf stint which, in 1980, found him ranked 14th in the world. That year, he won the OM Bali Pro, before leaving competition to focus on his self-shaped boards, testing them at then-cryptic reefs like Grajagan and Desert Point. In 2009 Banks launched the Indo Odyssey, a peripatetic, continuous, beyond-the-box surf charter. Bali-based, the Odyssey was six years of wander and wonder, shuffling punters atop ocean wilderness to question marks and stones-unturned, to proven swell-magnets and isolated old-faithfuls, most with no access by land. The archipelago’s surf seemed limitless, its quality superb, crowds an impossibility. Last summer, however, after another sublime run, Banks hit the Stop button and, midway through his 38th Indo season, the Odyssey ceased.

Were you the only current charter business dedicated to such remote exploration?

No one was doing the entire Indonesian coastline like we were. Probably 99 percent of the boats were running out of Padang and doing the Mentawais and the Telos. There are a few boats in the Banyaks, and there are a few out of Bali doing Sumbawa and Lombok. I think there’s one boat down in Rote, doing some trips. Everyone is pretty localized.

But you were exploring remote areas and finding dozens of new spots?

Yeah, that’s right. Some of the places we would visit, I was curious and I would go in and talk to the villagers and ask them if they’d seen surfing before. They’d say, “Yeah, there was a boat here last year,’” and I’d say, “Oh, that was us!” We were the first to surf at a lot of spots. At some of the best waves we found, we would pull 50 meters behind a couple of places in particular, and everyone on the boat would say, “Oh, bummer—no surf.” You couldn’t see the wave, even from 50 meters behind. I’m pretty sure no one else has surfed those spots.

No one was doing the entire Indonesian coastline like we were. I’m pretty sure no one else has surfed those spots.

What zone has the highest concentration of great waves?

You’d have to give it to the Mentawais. For the level of quality and conditions, that place is pretty hard to beat. West Sumbawa is good, but it’s also busy now.

What about the Odyssey surprised you most?

I’m amazed that a lot of the places we went to are still under the radar. That was always the dilemma for me—how do I fill these trips without giving away the locations of the surf spots? I’d always hoped, when I started doing the charters, that I would have enough interest from my own customer base without having to really market or advertise them. Didn’t work out that way. At the end of the day, though, I have other things I’d rather do. I prefer to be hands-on—I like making stuff. I really like building guitars, so I want to get seriously into that. Right now I’m only geared up for electrics, but probably next year I’ll be geared up to make acoustics again. It’s another one of those professions where you get paid miserably for an amazing amount of skill and knowledge.

Why stop the Odyssey?

We found a lot of amazing waves, and yet it was still difficult to fill seats. I came to realize that most surfers aren’t very adventurous. They want it all guaranteed and packaged—a TV dinner, you know? Unfortunately, it’s sad but true. I went through a stage thinking we weren’t finding good enough surf, but then I went to the beach in Sydney, looked at what people were surfing, and thought, “Yeah, we’re finding amazing surf.” It used to completely baffle me—we’d have people inquiring about a trip, and they’d want to go to the Mentawais, which would’ve been a waste of time. I could take them to amazing surf with no one around. Such a rare opportunity, because in 10 or 20 years, maybe there will be people around. I used to surf Desert Point by myself. During this last swell, there were 200 people in the water. I used to surf Uluwatu by myself, G-Land by myself, Nihiwatu by myself—all these places. I could tell that some of the spots like Ulus and G-Land were going to get busy, but I actually believed that Desert Point wouldn’t. It’s hard to get to, it’s fickle, and the average surfer probably doesn’t really want a wave like that. I was completely wrong. 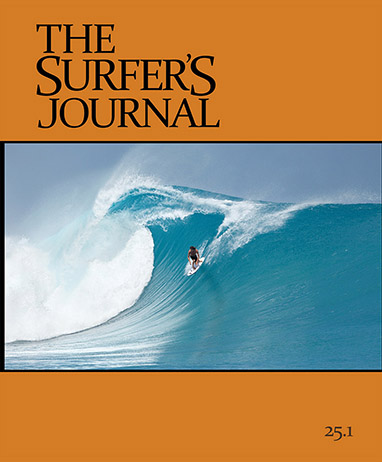 This interview first appeared in TSJ 25.1.