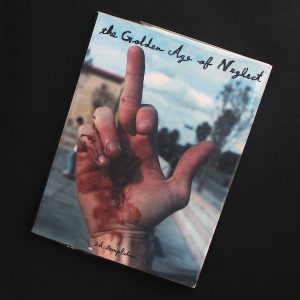 The Golden Age of Neglect by Ed Templeton

Ed’s first book came out in 1999, which was around the time that I became more exposed to things outside of my little childhood world. I was 14. That was the same time that Thomas Campbell’s The Seedling came out, and the Strokes first album, Is This It, was released. I was starting to find things on the Internet, and I was becoming more aware and paying more attention to stuff beyond just surf clips. I was gaining more perspective on art. And I feel like all of those things have aged really well. Those pieces of art were drawing from classic and well-positioned foundations.

As for Ed’s photography, it just feels powerful. I remember the cover of The Golden Age Of Neglect, the bloody hand, felt shocking when I first saw it. The saturation of the ink and the color tones were different than anything I’d seen, and his work is so distinctly his. It’s so raw and so candid. It’s not put together photo shoots. He’s telling real stories with photographs. He’s part of the communities he shoots in, and so he gets to see it from an insider’s perspective. He started out as a skateboarder, and he realized that he was pretty privileged to be going to all the places he went and with all the people he went with. And so he just started shooting everything around him. And that’s kind of how I started, only with surfing, and so he made me think it was possible to do good work that way. 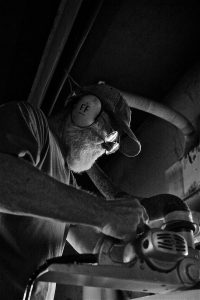 I grew up in Capo Beach. In our neighborhood, there were a bunch of heavy-hitting figures in the surf world. Phil Edwards lived nearby, Terry Martin lived a few streets over, and Danny Brawner was just down the street. My dad was getting boards from Terry, and then I started to get mine from him. I was pretty young. We’d buy blanks and then go to his house, where he had a shaping bay in his garage. And he was such a good shaper that he could knock out a board in about an hour, sometimes faster than that.

Being a kid, it was cool to talk to him about what I wanted and different design elements. And he’d be talking story throughout the whole process. I got a ton of boards from his over the years. I was really fortunate to be able to do that, and to spend so much time with him. I got to see the whole process. I learned so much about boards and about surfing history from just hanging out, talking to him about dimensions, or stopping by the Hobie factory when he was working on production boards. It was so much more insightful than just going to pick a board out from a shop. This was before I started taking photographs, and I always regret not being able to document all that stuff. 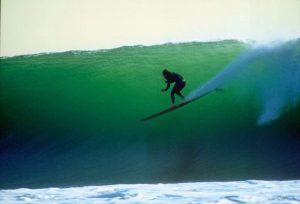 I remember being pretty young and seeing this image for the first time. He’s riding a 9’9” Hornet. I think most people, and definitely most surfers, can remember certain photographs that for one reason or another are visually appealing and stick with you. This image isn’t as iconic as other surf photographs, but at the time it really resonated and stuck with me. The way his line is so on edge, the size of wave and how you can really feel his speed, and the way he’s silhouetted with the backlit sun. There’s a timelessness to it, and I felt that even when it was new. Even if what I’m shooting has nothing to do with riding a wave, that’s a quality I look for when taking photos.

Earlier this year, Alex Knost and I took our dads down to Scorpion Bay, which is where Matt and his wife, Brittany, live. We hung with them for a good portion of the trip. We went to their house, and Matt had a small framed print of the image on the wall. I brought it up to him how much I loved the photograph. It turns out he was borrowing Brittany’s wetsuit and board that day. He just threw on her stuff and ran out for a quick surf. I thought it was kind of funny that something so unplanned could result in an image that had an affect on someone else. But that’s how powerful photos can be. 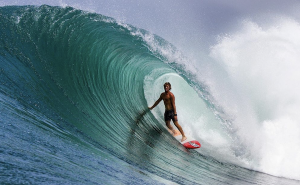 When I first met Alan he was a really young kid. He surfed good, but little kids only have so much power. But over the last couple of years, going on trips with the Vans team, he’s really grown and matured into having a really natural power. He’s one of those surfers who is just natural when he stands on a surfboard. He grew up in Pasquales, and I think learning to surf in powerful waves has paid off. He doesn’t just know how to surf them, he looks good doing it. He has a really natural style in heavy waves, and knows how to use his rail.

We were recently down in Salina Cruz, and Alan borrowed one of Knost’s bonzers. He rode it so correctly and made it look so good. I think a lot of other kids his age would approach that board like a thruster, try to pump it like a thruster, and pick lines like it’s a thruster. But he had great motion and rode it the way it’s supposed to be ridden. It was really refreshing to see a 16 year old able to do that. I’m excited to see him grow into his frame and get a little more power. 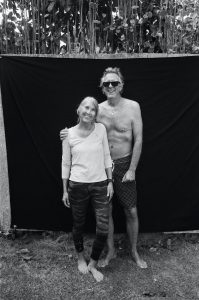 My mom, for as long as I can remember, has painted. She’s dabbled with plein air painting before, but mostly she does landscape and still life oil paintings. She always encouraged me and my sister to be creative, and try to nurture that in us. And my dad was a part of both the San Onofre and Doheny Surf Clubs. He not only taught me how to surf, but he always took me to the club contests, and all the kid contests that they had. That was where I met all my friends and people that I still hang out with and work with.

I think my learning how to surf was a little bit different than in most places and for most people. My dad longboarded, so I learned how to surf on a longboard. Being a part of that scene, which was really small at the time, I quickly made friends that did the same things and got turned on to all the old surf films. As kids we were in to movies like Morning of the Earth and Crystal Voyager. And we had these homemade movies that we’d pass around. One of them was a seven-minute Lance Carson highlight real that my friend spliced together.

And I have to thank my parents for not only introducing me to art and surfing, but pushing me to do them in a way that wasn’t the norm at the time. And that was totally different from what was going on in the thruster world. 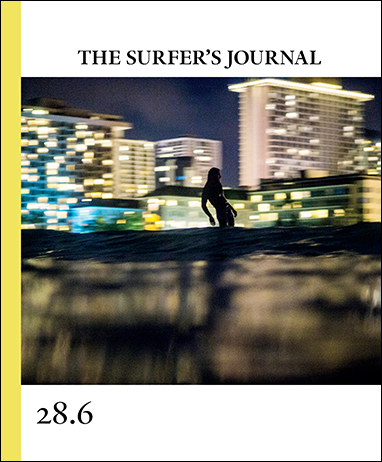 Check out Hall's full portfolio in the new TSJ.