On the North Shore of Oahu? Adolescents take soft tops out to the heaving, sand-sucking monster called Ke Iki shorepound and stroke into unmakeable ledges that collapse like God’s angry fist mere feet from the golden grains on shore. Yes, young men like Barron Mamiya, Noah Beschen, Makana Pang, and Kalani Rivero run into that churning, violent blue while cackling madly with adrenaline and youth. They scream and goad each other with three short words that prod and poke at the animal called dignity trapped in the cages of their souls: You won’t go. Which of course makes it so they do.

But why? Why was Jeff Hakman out a big Waimea Bay when he was barely 14? Or the late Eric Diaz when he was just 12? Why was Mark Healey prepubescently packing closeouts at Sunset Beach? Is there something in the tap water on the North Shore? Or is it simply a product of the environment? Is it some ancient-warrior impulse? A form of natural selection signifying their reproductive viability? Peer pressure?

“I think the ‘you won’t go’ attitude is universal among young boys,” says Shane Dorian. “They just have a lot of energy. It’s a natural, competitive, adolescent thing. But what separates Hawaii from the rest is the exposure and access to heavier opportunities. I mean, there’s only one Ke Iki shorebreak in the world, or one Pipeline—so kids growing up on the North Shore have a lot of opportunities. Coming from the Big Island, I definitely felt like I had to prove myself more. So I grew up wanting to ride bigger waves, but was also very terrified of them. Then once I became a teenager, I met guys like Ross Williams, Todd Chesser, Jason Magers, Keoni Watson, and they were already surfing pretty big Waimea at 13 and 14 years old. So I sort of wanted it, but didn’t really know I did until I was actually put in that situation.”

“I think it’s a cultural thing in Hawaii,” counters Mark Healey. “For instance, you can be the cool guy in California with the nice car and people put you up on a pedestal. But in Hawaii if you don’t earn your stripes, whether in or out of the water, then you have a glass ceiling of respect. And Hawaii is all  about respect. Thank God it’s still that way. I think you have to prove yourself in more of a primal way than other places in the United States, too. You have to prove your valor and your worth and that translates into proving that you can be relied on and not turn and run when things get tough. And those are important values in Hawaii. But I think being a haole kid growing up on the North Shore—maybe you’re offered more opportunities to prove yourself, you know?”

Certainly, Hawaii is a different place, in the water and out. It’s the 50th State in the Union, sure, but you might as well bring a passport. There are unspoken rules. Different courtesies and codes of conduct. A more pared down, or “primal” as Healey puts it, definition of respect. And in the water? Just because you give it, sure don’t mean you’ll get it. But give it you must.

“If you were around the scene back then and you didn’t go…that wasn’t even a thought,” says Jeff Hakman, who moved to Hawaii in 1960 at 12 years old, and subsequently won three Duke Kahanamoku Invitational Championships. “If you were out, you had to go. It’d be humiliating if you didn’t. I don’t know how to explain it. It wasn’t an option. Especially because in those earlier years everyone was so macho coming over here, from Greg Noll to Jose Angel. All those guys were larger-than-life macho characters. And it’s kind of the same today. I just got dragged along and took off because I had to.” 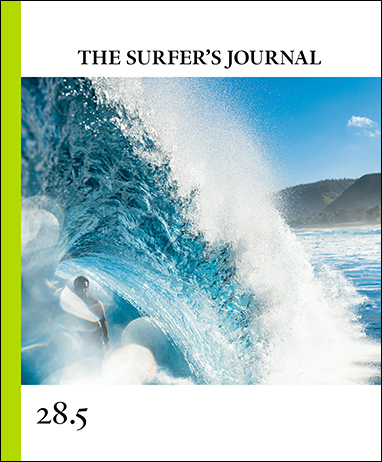 Hit the subscribe button to read "You Won't Go" in full.