It’s June 8, 2012. A remarkably large, long-range swell event is unloading over the Fijian reef pass called Cloudbreak, a short boat ride from the island of Tavarua. It’s Code Red, as they say. The sea is massive, and it’s unusually clean for its size. A World Championship Tour event is in the middle of its waiting period. The contest’s director says try, and two heats take to the water as the surf grows larger. A knee is twisted in ways a knee is not meant to twist. The surf grows larger still. The contest is called off for the day. It’s too big, too heavy, too mean.

As the event waves its white flag, an array of large surfboards are set onto the surface of the water. Their owners quickly join them, diving over the sides of skiffs. A couple dozen in total, they are some of the most accomplished big-wave surfers on the planet. They’re here precisely because it’s too big, too heavy, too mean. Derek Dunfee is among them.

“The hype was out of control,” says Dunfee. “But it was warranted. There was a rare energy in the ocean. There was a feeling that it was going to be one of the best days of big-wave surfing ever.”

Dunfee is 29 years old as he claws his way toward the lineup. Broad-shouldered and wiry, he is at the peak of his big-wave powers, that nexus of experience and physical capability.

He doesn’t wait long before taking off on a wave from its shoulder, something of a warmup to get acclimated. On the way back out, he stops near the boats to calm his adrenaline and catch his breath. The sounds of whistles, shouts, and cranking motors cut through the air. A wave that’s bigger and heavier and meaner than anything else that’s come through that morning tears over the horizon. The boats and jet skis buzz off. Dunfee is left alone as the wave rumbles toward him. He tries to scramble deeper into the channel, but the wave is moving too fast.

The wave’s lip cracks down on Dunfee’s head. Everything goes black. He’s pulled to the surface by his safety vest and vomits as he comes to consciousness. Then he’s hit by another wave. Underwater, he doesn’t know which way is up. He doesn’t even know where he is. He’s close to drowning before he washes into the calm reprieve of deeper water. His trunks have been ripped off his body and are knotted around his leash. He vomits again. Too dizzy and nauseous to get on his board, Dunfee lies on his back and stares up at the sky.

A ski eventually pulls up. Dunfee drags himself on to the rescue sled. But he’s too weak to handle the speed and lets go, sliding back into the ocean. The ski keeps going, and Dunfee is forced to paddle back out. He’s exhausted and feels ill by the time he throws himself back into the boat. This isn’t the first time Dunfee’s found himself in heavy-water trouble. There’d been two-wave hold-downs at Maverick’s and riptide suckouts into open ocean without a board at Puerto Escondido. At Cloudbreak, years before, he’d left strips of his face on the shallow inside section on one occasion. On another, he snapped his leg after a tube clamped shut on his back.

But there in the bottom of that boat, it’s different.

“It was purgatory,” says Dunfee, “like being stuck between a dream and being awake. Just a fog. I saw spots and stars. My ears were ringing. But the scariest thing was not knowing what was wrong with me.”

Dunfee is severely concussed. His brain is shaken and battered and bruised. It’s a life-changing injury.

The day goes on and the hype delivers. The surf jumps as morning becomes afternoon. Dave Wassel, Reef McIntosh, and a host of others ride some of the most memorable waves ever. Mark Healey is forced to rip his leash and dive under one of the biggest, heaviest, meanest waves to ever pass through the South Pacific.

Dunfee watches on, punch-drunk in paradise, suddenly made a bystander to the very thing he’s spent his life chasing. But at one point, he reaches into his bag and pulls out his camera. Between vomiting off the boat’s side and bouts of faintness, he takes photographs of it all as it unfolds.

Though he doesn’t know it, he’s already found his next rabbit. 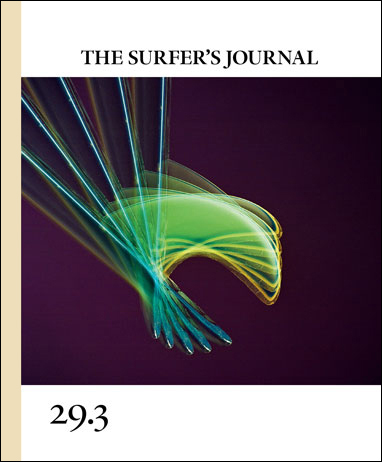 Get the issue today for the full story.