Subscribe
Feature
Al Merrick, with another offering for the test-track, 1980. Photo: Jimmy Metyko

“All paths lead back to Al Merrick,” I used to say, back in the late 80s/early 90s when I was at the height of my surfing career. It was a maxim put to the test. In what might be called a “taking a break” period, I tried boards from a variety of the best shapers in the world. And while they all had their respective merits, there was something missing, something deeply ingrained and foundational, something that can only be developed over years of working with a single shaper. It’s analogous to romantic relationships. You can hop around, dip your toes. It can be heady and fun. But there’s a symbiosis that develops over time, an intuitive connection. And I am here to argue that the long-term trumps the wham, bam, thank you shaper.

I started riding Al Merricks in 1981. A junior in the WSA and NSSA, my teammates included Tom Curren, Willy Morris, and Shaun Tomson. Al was much more than just a shaper. He also coached, mentored, and competed in the amateur ranks himself, so as to get closer to his test pilots. He obsessed over rocker, vee, rails, plan shapes, et al. In the early 80s, his tried-and-true design was the tri-plane hull, ridden to virtuosic heights by Tom Curren. But he wasn’t pushing that as be all and end all. He wasn’t trying to get his team riders to adapt to that design.

I was coming off McCoy single fins of the Cheyne Horan variety: narrow nose, wide point behind center, super-wide, double-wing swallowtail. My first board from Al was, with hindsight, a way of transitioning into what were radically different ideas. McCoy was about the pocket. Merrick was about drive and forward momentum. I remember talking to Al at length before he actually shaped the board. We came up with a double-wing squash-tail thruster—something he’d made very few of. It went fantastically well. It led me to a West Coast Junior Title. And then boards that came after that—evolving, me wrapping to Al’s style, him wrapping to mine—would lead me to a pro career.

There was a kind of soup brewing in the Merrick factory. On one visit, there’d be Shaun Tomson’s most recent J-Bay design leaned in the corner. On the next, Tom Curren’s world title-winning Black Beauty. We were loyal team riders. Getting boards from Al was an ongoing dialogue. I’d bring to the shaping room whatever board I liked most. We’d set it on the block and inspect it. “There’s this drive that I really like, it’s faster than any board you’ve ever made me,” I might say. “But I want it to turn on a dime more. I want more responsiveness, more sensitivity.”

I tried boards that were wholly different to my Merricks. I experienced bursts of marvel and revelation, but some level of comfort and familiarity was missing, that sense of board as extension of oneself, appendage.

Al would nod knowingly, hold it up, eyeball it in that codified way that is intrinsic to shapers, baffling to anyone else. He’d set a triangle on the tail and tip it back and forth to check the vee. He’d maybe take a few measurements. Then he’d move it to the corner, replace it with a fresh blank, and draw out a plan shape from the many templates hanging on the wall.

The templates are what I mean by the “soup brewing.” They were taken from magic boards, named according to team riders. I might get some “Tom Japan ’82” in the nose, some “Willy Pro Class Trials” in the tail, some newly-designed hip that Shaun Tomson was hyped about. But ultimately Al was reading me. And it transcended that verbal feedback I gave him. Like an Ayurvedic doctor who looks deep into a patient’s eyes, like a chiropractor who studies the way a patient walks and stands, Al was translating my clunky explanations into the language of curves. He was thinking about my style, the waves I’d be riding, the parts of my surfing I needed to develop.

About five years into my working with Al, we hit a real grace note. His boards had shaped my surfing, and I mean that in the best possible way. Each shaper has his tenets, his kind of wave-riding philosophy and ideology, integrated into his boards. As a team rider in deep dialogue with that shaper, you can take it to new places, but that DNA is inherent in all his designs. I was drawing Al Merrick lines, just as, say, John John Florence is drawing Jon Pyzel lines, or Stephanie Gilmore is drawing Darren Handley lines. But, see, the Merrick/Pyzel/Handley lines are ultimately affected by the loyal, long-term team riders, so it becomes reciprocal. The boards become the result of a union, or various unions, from which all parties benefit.

What might I have gained had I jumped around? Well, I tried boards that were wholly different to my Merricks. I experienced bursts of marvel and revelation and, in what approximates a competitive surfer’s midlife crisis, I was sure that these boards would lead me to the performance heights I aspired to. But again, some level of comfort and familiarity was missing, that sense of board as extension of oneself, appendage. I’d laid groundwork with Al that was not about to be eclipsed by freshness and novelty.

And there are many ways of breathing new life into your boards. There are radical departures that can break you through to that other side. For a time Al made me six-channel thrusters, six “gutter” channels, not unlike—but not as deep—as the ones made famous by the late shaper Allan Byrne. This gave me a burst that lasted a couple of years. Then I went back to the standard bottoms that Al was doing in 1990/91. My surfing rose. I got a good result in the Stubbies Pro. I called him afterwards, exuberant.

“You’ve resurrected my career,” I told him.

“Don’t put that on me,” he said and laughed.

It’s a team effort. The more you put in, the more you get out. Provided of course that you’re with the right shaper to begin with, and that he’s as committed as you are. I came to Al a wiry, immature, unformed 15 year old. After a decade of working closely with him, after 100 plus boards, I was able to make my surfing the best it could be. Now, in what might be called the early autumn of a surfing life, I reap the rewards of what has been sown over 30 years. It’s an intuitive thing, a self/board knowledge that adds meaning to the surfing experience. 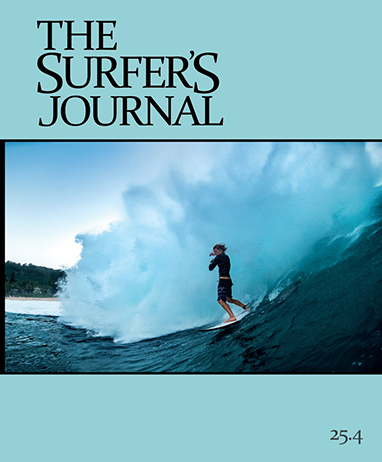 This essay appears in TSJ 25.4, on newsstands now.