If over the past, say, decade, you haven’t had occasion to visibly wince at the dramatic over- and/or mis- use of the phrase “waterman,” you’re probably not paying attention. The word is everywhere: In publications both mainstream and surf-specific, in marketing campaigns (especially in marketing campaigns), in fawning descriptions of people, in films and the subjects of films—“waterman” has been having itself a nice little moment.

And yet it’s a strange moment, if only because it’s entirely unclear what drove this most recent resurgence, even less clear who or what we are actually attempting to describe when we call someone a waterman in 2016, unclear-er still what vague-yet-vaunted praise the phrase is meant to convey, and perhaps most unclear of all how and why, over the past ten years, “waterman” has become the aspirational descriptor for oceangoers everywhere. So casually deployed is the phrase today that it often seems as though anyone who so much as paddles a Saturday afternoon mile or straps on a handplane for a post-work womp is being fed a carrot from the culture at large to self-identify.

Fair enough. It’s a proud title, after all, and one that expands our ocean-going identities beyond a simple act. A “surfer” just surfs and a “fisherman” just catches fish, but a “waterman,” or so we tell ourselves, is someone more, something more, even if we can’t quite say what that something is.

So extolling is the phrase that despite its dilution, it hasn’t lost its cultural resonance. Trying to divine a consensus definition of what, precisely, makes a waterman is a fool’s errand—10 people, 11 answers, etcetera, but there’s no doubt that the word is our culture’s highest honorific, as close as we get to standing up and saluting. The question is why?

It’s entirely unclear who or what we are actually attempting to describe when we call someone a waterman in 2016, unclear-er still what vague-yet-vaunted praise the phrase is meant to convey.

Ambiguous by nature—two nouns unceremoniously slammed together—the word’s vagueness serves several masters. Writ large, it conjures an ethos and a set of practices, with a quick nod of the head in the direction of history and heritage, sure. But in 2016, it’s equally safe to say (and perhaps more important to acknowledge) that the term has come to show remarkable utility as a buzzword for brands, a trite (if savvy and effective) imprimatur for marketing departments worldwide looking to co-opt a lifestyle and make a tidy profit in the offing.

Which means that in our current era the only unimpeachable truth is that the word is heavily fraught. Examine the conversation online, for instance, and it should take fewer than ten minutes for you to realize that you’ve entered an ideological and self-serious morass driven by a tremendous amount of good old-fashioned, chest-inflated, surf-cultural dick swinging. All of which seems to fall along two distinct, telling and predictable lines of ideological fault: 1) Self-appointed, earnest traditionalists, standing in judgment, steadily doling out salt-encrusted jeremiads against perceived carpetbaggers, and 2) Said carpetbaggers, shamelessly shilling all manner of product (but mostly just stand-up paddleboards) by the Matson container, fists placed steadily beneath ever-rotating hands, hocking product via the appropriation of the word itself and the creation of carefully curated promotional materials comprised almost entirely of suggestively gritty and tough-nosed oceanic imagery. Miles are paddled. Bodies are hardened by water. Etcetera is etcetera-d. And for a low introductory fee, this, too, can be yours.

It’s all more than a bit silly, of course, the type of thing that a real waterman—whoever that turns out to be—wouldn’t have the time of day for. Which brings us to the question at hand.

Too many hagiographic words have been spilled on the subject of what a waterman is to warrant rehashing, but turn to the literature and you’ll inevitably find purists saber-rattling with phantoms, disturbingly obsessed with an is/is not dichotomy that almost certainly does not exist. To point out examples would be mean-spirited, but they are many, and the only thematic consistency among them seems to be an irrational compulsion to apply a set of arbitrary parameters on what and who, precisely, a “waterman” is (cue the phrase “all conditions”) and—more pointedly—a similarly irrational compulsion to put a set of parameters on what and who a waterman is not (basically anyone this side of Molokai). This parsing of who does and does not get to come to the club meetings is the worst parts of surf culture laid bare—exclusive, elitist, insular, self-important, but also understandable, if only because it’s sourced in an anger at perceived interlopers trading on and profiting from some otherwise authentic thing.

This parsing of who does and does not get to come to the club meetings is the worst parts of surf culture laid bare—exclusive, elitist, insular, self-important, but also understandable, if only because it’s sourced in an anger at perceived interlopers trading on and profiting from some otherwise authentic thing.

As for those interlopers? They all seem to mine the same tired clichés, but take away the Tumblr, Command-Z the Instagram filters, Force Quit the Photoshop, and what you’re left with is a cynical play directed at, but grounded in no reality for, the broadly-painted and equally faceless “end consumer.” It’s target marketing, pure and simple, and the dispersing of daydreams to folks who need them. To look at the websites, the ads, the magazines, and the glossy brochures is to become convinced that underwater rock-running is a tremendously popular activity with your workaday surfer. It is to believe that the watery majority of us out there are pulling in our nightly meal via handline and outrigger canoe. It’s a sham, is what it is—the whole distasteful thing. An entirely aesthetic promise being peddled to that ever-growing percentage of coastal-dwelling folks for whom the ocean may as well be a 24 Hour Fitness, good for 60 minutes of pre-work lung-pumping before the knotting of double windsors and the filing of briefs.

That’s no slight—not on ties, not on jobs, and certainly not on people long on responsibility and short on spare time looking for something aspirational to hang on to. But while there’s nothing wrong with being inspired by the optics of a decidedly beautiful culture, daydreams are daydreams precisely because they have a tendency not to manifest—and they certainly don’t do so with the swipe of a Gold Card. Dropping 10 grand on a chronographic dive watch doesn’t make you a waterman any more than buying a Waterman pen makes you a writer. And that carbon-fiber paddle in the garage will, at day’s dusty and sundried end, still just be a paddle in the garage if you don’t know what to do with it.

So yes, waterman in its current iteration is fraught, but fraught perhaps for the best of reasons. Surf culture, ocean culture, may be given to the cynical and the idealistic in equal measure, but the phrase—when used accurately and sincerely—has over the years come to represent a sort of common ground. Perhaps this is because when we talk about what it means to be a waterman we are not actually talking about a set of skills, but rather something far more prosaic. Perhaps we are talking, in our most unapologetically Deepak- and Oprah-infused terms, about our highest aims, the best parts of what life on the water can offer, the things we have always valued most as a culture—commitment, devotion, understanding, awareness, competence, self-reliance, respect.

Which is kind of the point. That such an inherently subjective label has for so long been discussed along vague moral and ethical lines is telling. Lost in the attempts to quantify and make an objective definition of what a waterman is—the checking of boxes and attempts to pin down—is the fact that the activities themselves are just the lemon next to the proverbial pie. The activities themselves—the spearfishing and freediving, the surfing and paddleboarding—are, in fact, just byproducts of an ethos, and it’s the ethos that we respect.

When we call someone a waterman, maybe what we’re really saying is that that person is entirely and uncommonly devoted—to their core, in a subculture already rife with uncommon devotion—to the raw, edge-of-nature wilderness experience that the ocean can offer.

On some level, we probably all know this to be true. But of course in our actual discussions we almost always ignore such intangible and considered realities in favor of a simpleminded and wrongheaded devolution into a cataloging of skill and adeptness. And this reduces our highest honorific to something like a trip to the local DMV—show your proficiency, get certified. When we talk about what makes a waterman, that is, our tone might shift to the reverent, but our talk shifts to the taking of stock. In our rush to answer an elementary question—“What do you have to do to be a waterman?”—we forget that what one has to do ignores the question of who one has to be.

Which means we’re missing the point. Surely there are hundreds of watermen and women out there gleefully flying under the radar, even in a modern era that would seem to render such dedication passé (more on which in a moment), but think of today’s unimpeachables—Brian Keaulana, say, or Mark Healey, or Dave Kalama, or the late Rell Sunn—and you’ll find that you’re thinking of men and women who not only know or knew how to do certain things in the ocean with incredible skill, but men and women who knew why they were doing these things, and dedicated their lives to existing in deep harmony and accordance with that profound sense of purpose.

When we call someone a waterman, maybe what we’re really saying is that that person is entirely and uncommonly devoted—to their core, in a subculture already rife with uncommon devotion—to a coastal life lived in its totality, to the raw, edge-of-nature wilderness experience that the ocean can offer, and to the possibility that such devotion can lead to a better existence not just as a person in the ocean, but as a person in search of a meaningful life.

All of which is as embarrassingly earnest, overwrought, and clichéd, as it is undeniably accurate. And therein lies the problem. 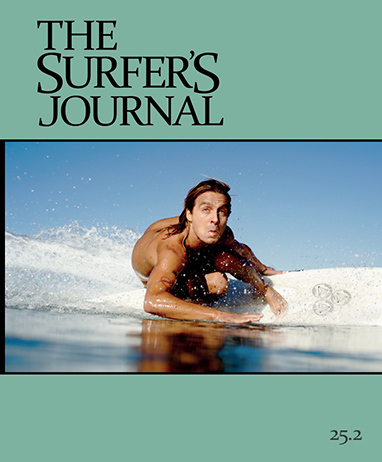 This essay appears in TSJ 25.2. To read more from this issue, pick up a copy on newsstands or subscribe.