In the 2017 book Solitude: A Singular Life in a Crowded World, author Michael Harris confronts his burgeoning addiction to “platform technology” and draws a distinction between loneliness and solitude. He sees a paradox: as social media behemoths like Facebook, Twitter, Snapchat and their ilk demand more sharing and tighter connection between users, we get addicted to the dopamine release of a well “liked” post. Loneliness floods in when we aren’t connected. Solitude, on the other hand, is a precious resource, our comfort in being ourselves. Harris argues that solitude is a fragile forest we must protect from a world more hell-bent than ever on cutting it down.

“If you’re lonely when you’re alone, you’re in bad company.”

When you search “solo surf” online, you find a video link named “The Beauty of the Solo Surf Trip.” It opens a lovely little surf film called, You only tell the truth in the dark. In it, Frenchman William Alotti rips down the Chilean coastline in a campervan presumably paid for by his sponsor. It’s an artsy, moody, broody, and beautiful film, scored by an ironical blend of songs heavy on the cymbals. But something rankles when you watch it. Just how did he manage to score that drone footage of his rental throwing up dust on a desolate road? And, unless a seal was packing a water-housed camera, how did he bag all that in-your-face water footage? Was he even alone on his solo trip? Why, in surfing, does “solo” mean “surfer plus someone to record your surfing?”

I live and surf in Cow Bay, Nova Scotia, a tiny hamlet on the outskirts of Halifax on Canada’s Atlantic coastline. It is a land of half-inch thick neoprene and fog-shrouded cobble points. You would think I surf alone all the time. But solitude in the water is rare, even here. Internet forecasting and a growth of new surfers, unafraid of cold water, has seen to that. Even in Cow Bay—where a dozen surfers in the water constitutes a fingernail-biting “crowd”—the solo session is going extinct, a relic of the past. I am that unfortunate brand of hermit surfer who will pass up the best spot for a lesser one to surf alone. To find a long stretch of surf solitude, I had to escape.

I live and surf in Nova Scotia, a land of half-inch thick neoprene and fog-shrouded points. You would think I surf alone all the time. But the solo session is going extinct, a relic of the past. To find a long stretch of surf solitude, I had to escape.

With the reluctant blessing of my wife and two young daughters, I took off on a three-week bike ride up the Eastern Shore, bound for the Fortress of Louisbourg, 400 miles away. I stuffed a rickety trailer with camping gear, a fishing rod, a backcountry road map, my funky wetsuit, and Old Yeller, my battered 6-foot twin-keel fish. I left my cellphone and watch behind to ensure my solitude would have a chance of kindling to life. By day three I was naked and babbling to myself after a slop-chop session on a cold, mist-infused beach devoid of all humans. Solitude, at first, felt like a kind of sweet madness.

“It does us all good to unbend some times.”

It was uphill from there. On day five I was chased from the water by an aggressive grey seal. On day eight I was devoured by blackflies while pitching my tent next to an abandoned lighthouse. On day ten a weld let go on my bike frame and I had to fashion a fix using pipe clamp. On day eleven I ate some bad Hereford corned beef and spent most of the day squatting in the bush. On day fourteen I was attacked by a Saint Bernard who almost ripped my shoe off. On day sixteen I slept in the wheelhouse of a lobster boat, drinking rum all night and screeching on my harmonica. And, on my final day, I got physically stuck in a matrix of deadfall spruce, my bike and trailer jettisoned where the sketchy foot trail began. It took me an hour to extract myself. For most of the trip, I was wet, cold, hungry, and blissfully alone.

My precious quarry was a total of eight solo sessions, seven of which were in mediocre conditions. The jewel—the yarn for the boys back home—happened unexpectedly on day twelve. I had set up camp on an eroded clay headland and fallen into a dead sleep after a rare sunny day on the road. By then I was in full Tom Hanks Castaway mode, talking to myself as if there were two of us in the tent. I sprung to life at first light when I heard the ocean, a drone of rolling cobble punctuated by the slap of breaking waves. I unzipped my tent and scrambled to the cliff’s edge. There, at my feet, was a clean stack of shoulder high lefts peeling lethargically into the bay.

I had begun talking to myself as if there were two of us in the tent. I sprung to life at first light when I heard the ocean, a drone of rolling cobble punctuated by the slap of breaking wave. I unzipped the flap and scrambled to the cliff’s edge. There, at my feet, was a clean stack of shoulder high lefts peeling lethargically into the bay.

“In order to understand the world, one has to turn away from it on occasion.”

“In our age of screens,” Harris writes, “the desire to chart things extends well beyond maps. We comment, we log, and we post in order to tell our nervous selves: I am known, I am quantifiable, I am right here.” In our colonized surf world of aggro lineups, Instagram hype, fantasy pools, branded adventure, point-and-click forecasting, and Google Maps precision, surf solitude appears to be a finite resource. Harris reminds us that solitude has three important functions: it calls up new ideas, it brings an understanding of self, and it—paradoxically—brings us closer to others. Out there alone, I noticed the lack of digital noise most acutely. My mind relaxed, the static disappeared, and I saw screens for what they really are: glass in the way of nature. Surfing alone became my antidote.

The only witness to my golden session, the only other being to hear my embarrassing cries of ecstasy, was a wheeling bald eagle, turning in a widening gyre above me. But I would be dishonest if I denied sensing a dull pulse of the surf ego I’d tried so desperately to suffocate on my trip. I had disconnected from everything, but I couldn’t shake a deep need to share. At one point, post kick-out, I looked up at the cruising raptor and an absurd thought crossed my mind: if only that bird had a tiny GoPro mounted on his head…

“I had three chairs in my house; one for solitude, two for friendship, three for society.”

By the time I reached the Fortress of Louisbourg, I was ready to see my family again. I was ready to rejoin society, ready to reenter the lineup. The Internet was exactly the way I left it three weeks before: clawing for attention, manic, intoxicating. But now it seemed fraudulent, hollow, devoid of humanity. My quiet resource was stockpiled by all those disconnected hours alone. Could I maintain my solitude in the face of our screen-infested world?

A slew of text messages appeared when I powered up my neglected smartphone. The most recent one read, “Out front, first light.” I paddled out the next morning to find two of my neighbors in the water. They were all smiles. They wanted to know how my trip was. Was I lonely out there? Did I get any waves? Did I discover any new spots? Before I could answer, a set reared up on the pink pastel horizon and we all spun to scratch for it. They both caught their waves. I paddled for the third, the biggest, but I realized I was synched out, too far inside. Thank god this isn’t Maverick’s, I thought, as the wave burst and pushed me, gently, to the bottom. 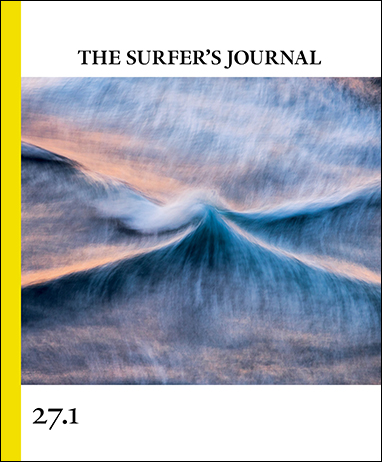 This essay appears in TSJ 27.1. Read more from the issue now.