“First off, it’s rugged.” Gary Downie takes a sip of coffee, adjusting his hat. We’re at the coffee shop, walls hung with the ocean-themed oils of a local artist, discussing the intricacies of Alaskan surfing. “It’s fucking amazing with an emphasis on fucking,” Downie adds. “I can tell you a bit, but I can’t tell you everything.”

Downie’s great-grandparents came from Washington to Alaska in the early 1900s. His great-grandfather logged the road that leads out of town, and his family homesteaded on the island where he catches waves today. They had a horse named Midnight, and perhaps the only cow in a 500-mile radius. “You look at this landscape formed thousands of years ago,” he says. “It’s beautiful, but you’re in Alaska. Which means there are so many variables to make it come out just right. It’s like a mathematical formula to get a perfect session.”

Most beaches of the 49th State remain empty. New waves are still being espied, including one I witnessed for myself a couple summers back with local surfer Brooks Areson, while we were hunting, just down the beach from where a humpback whale carcass had washed up, and was being devoured by a lineup of brown bears. Brooks first came to Alaska from Maine to work as a deckhand on a charter boat in 2000, a year after college. His second year in Alaska he began surfing, and quickly began to think of the state as home. “It can be fickle,” he says with his typical New England reticence. “And it can change quickly. I usually just go out in the boat and look.”

Brook’s version of a surf check is a little different than driving the PCH. For starters he generally spends his days on the water taking out clients on his custom-built Alaska aluminum fishing boat with twin 250-hp Mercury outboards. He always has one eye on the weather, and the swell. (There might even be a secret radio code he uses with his buddies that translates to, “This wave is going off right now, let’s wrap up the day.”)

If he’s bullish on the weather, he’ll set out to check out the spots, taking along a crash kit of flares, a sleeping bag, a SPOT satellite locator in case of radio failure, and a 30-aught-six rifle for bears, before heading into a zone that encompasses nearly 5,000 square miles of land and sea wilderness. One local tip: don’t stash boards overnight on the beach—the sweet wax attracts the grizzlies. Air temperatures range from about 0 at the extreme lows, to highs in the summer that average about 70. Water temperatures fluctuate less, from the 40s to about the 60s. Still, wetsuits requirements are 5-mil most of the year. But the surf is empty, the swell potential is fueled by the North Pacific storm track, and in summer sessions can last well past 10 p.m. The good breaks are reef setups, thanks to the lava, which created basalt steppes as it dried. The quality can be, “machine-made,” according to Downie. And if it happens to be flat, you can snorkel the kelp forests, stalking black rockfish, ling cod, halibut, even salmon with a spear gun.

If he’s bullish on the weather, he’ll set out to check out the spots, taking along a crash kit of flares, a sleeping bag, a SPOT satellite locator in case of radio failure, and a 30-aught-six rifle for bears.

“It’s the purest dream world I have experienced,” says pioneering surfer and naturalist writer Richard Nelson, who caught his first wave in the far north 34 years ago. And this gets to the heart of what concerns Nelson: overexposure of Alaska. “The greatest treasure of surfing in Alaska is that most of the waves up here are remote and solitary, seldom if ever ridden. That’s a huge contrast to most other places, where the surf is overcrowded and surfers respond by becoming aggressive, even hostile.”

It’s a well-rehearsed story that loops over itself as it moves northward up the west coast, from hot to cooler climes. Locations of breaks becoming exposed, the wild edge softened, then disappearing altogether. And who would want to wake from such a pure dream? Tying off to a kelp bed to watch sets break off a basalt beach. Gathering the courage to paddle out, to feel that particular thrust and tumble, the precise congestion of water. “It’s an amazing feeling, all that natural energy, what the ocean can create with you being inside it,” Downie says.

It’s experiences like these, intimate connections with the wild world, that Nelson worries are at risk, even as far north as here. “Thus that fine line between sharing what we love and being selfishly possessive about it,” he says. “I had the blind luck to be first into the surf here after surfing for a few years farther north along the coast, but I might equally well have been the second or 15th or 50th. Nevertheless, I still think we’re all responsible for taking care of this privileged situation.”

Being first in anything is, of course, a privilege. And a rare one when it comes to empty waves in isolated places. On the other hand, surfers here also describe how wave-riding in Alaska draws people closer to the wild, not to mention one another.

“It’s generally five or six guys in the lineup,” Brooks says. “That would never happen down south. Even in Costa Rica or Panama, you drive five hours and find 20 guys in the water. You’re not glad they’re there. They’re not glad you’re there. But if I was going to emphasize any one thing about surfing here it’s community. And I don’t mean a surf community, but a town community. Girls, the guys, Coasties, people just starting out—you don’t get the feeling of an aggro crowd in the water. If someone we don’t know is out there, we’re like, ‘Hey man, how are you? Cool you made it.’ There will always be some connection. Like, ‘Hey, that’s Downie’s buddy.’ People don’t just appear without somehow being part of the network.”

It is this closeness with the wild edge, earned by way of generosity, and exquisite awareness of the natural world, that Alaskans prize. “Surfing in wild places is one of the greatest ways to find an intimate connection with the ocean and the other creatures I’ve encountered here,” Nelson says. “For a while it was scary, but it soon became comfortable. And then it was simply my surfing life. Everything exactly as it should be.”

Brendan Jones lives on a tugboat in Alaska and works in commercial fishing. A former Stegner fellow at Stanford University, he is also the author of the novel, The Alaskan Laundry. 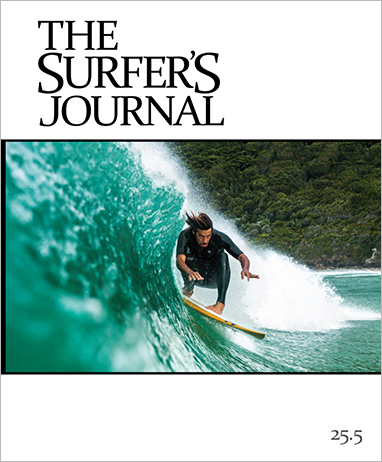